I’ve been using a magnetic stir plate for some time now. My original one was put together for no cost from spare computer parts, a power supply that was laying around, and some scraps from a plastic tub – it wasn’t pretty, but it worked okay (okay being the word). And then came the accident – an over flowing yeast starter spilled into the stir plate, spelling the end of stir plate 1.0. But, like a phenix, a new stir plate is rising from the ashes of the old.

For those who may not know what a magnetic stir plate is or why on earth would a home brewer have one, its a device used to constantly stir a liquid. If you ever saw the inside of a lab with beakers of liquid spinning a seemingly magical whirlpool inside, you’ve probably seen a magnetic stir plate in action. It works by using the power of magnetics, one magnet inside the beaker or flask and the other under the glassware spinning. The spinning magnetic underneath causes the magnet in the liquid to also spin. Magic!

Why would a home brewer ever need such a piece of equipment meant for a lab? Well, to grow yeast. When it comes to proper fermentation, the right amount of yeast is important and there is no better way to get yeast growing them to feed the sugars and oxygen. A yeast starter is made of a bit of un-hopped wort (usually made form dry malt extract) and is allowed to ferment out. The yeast will multiply and ferment, but if there is a constant injection of oxygen the yeast will keep multiplying and building strong cell walls and good reserves to fight the big fermentation when its time. A simple starter is just like (or can actually be) and small, low gravity beer – it will produce a bunch of yeast and is, well, simple. Take a bit of wort and put it on a stir plate with the constant feed of oxygen being stirred in and that smaller amount of wort can produce a lot more, healthy yeast then a simple starter.

So, getting to the building part.

Disclaimer: I am an electronics technician by trade. If you don’t know what you’re doing with electricity or are not comfortable, don’t do it yourself, get a professional to help.

I (re)build my stir-plate from a cigar box, a variable power supply (1.5-12V DC, though a 5V supply would probably work fine), a 12V DC computer fan, a couple of magnets, a toggle switch, and a 25 ohm, 3 watt potentiometer (a variable resister, the nob to control the speed). My original stir plate was the same power supply and a magnet from a computer hard drive, but I got new rare earth magnets cheap from China (thanks eBay), the other parts came from The Source (Radio Shack), and I had the cigar box from a trip to Cuba.

The first step is to fit up the box to hold the componest. My fan fits snug inside, but I needed to drill holes to get the switch, speed control, and power wires in.

Then to fit and attach the components. 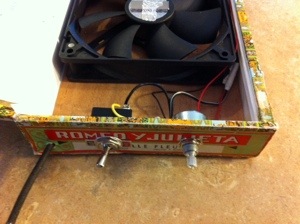 Attach the fan securely into the box. Mine actually was pretty snug in there and the lid rested on it (the fan was still free spinning), so I was luck and didn’t have to worry about it. You will need the fan in the box in such a way that its really close to the edge where the flask with the starter in it will be – the magnet will need to be pretty close. The next thing is to add the magnet to the centre of the fan. I ended up using two magnets evenly off-centre with their magnet poles in such a way that they work together, this worked pretty good. They want to stick down on their own, but to keep them in place I used a bit of aluminium tape I had on hand.

To used the stir-plate you will need a flat bottom contained, an Erlynmeyer Flask is best because it has a flat bottom, but also a narrowing neck – a 1000mL flask is good, but a 2000mL flask would be better. You will also need a magnetic stir bar, a teflon coated magnetic bar that can be sanitized and be put into the flask with the wort. These things are both available online for not too much money.

And thats it. Pretty simple to build and a very valuable piece of equipment when it comes to yeast propagation.