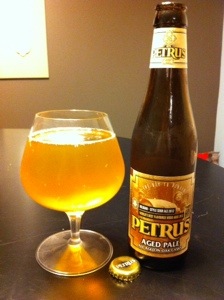 The Bavik website describes Petrus Aged Pale as “an undiluted old ale”. This is a variation on a Flanders Oud Bruin (Old Brown) – a traditional Belgian sour ale.

Appearance
Cloudy and pale with no head and lots of carbonation.

Aroma
Lemons, melons, leather, and apples. Bight and clean with some oak.

Mouthfeel
Light mouthfeel due to dry fermentation and high carbonated. A bit thin.

Crystal or Caramel malts are listed on nearly every recipe from porter to IPA, bitter to schwarzbier, all-grain and extract (with grains, of course), but why is it sometimes called crystal and sometimes caramel? Is there a difference or are these two words totally interchangeable and just up to the writer? My brew software generalizes them together and so do most websites (including this one), so whats the deal?

I’m sure many would just say they are the same in every way, but thats not really the truth. Sure they are similar in usages and share the same colouring levels and similar flavours, but there are real differences.

In a nutshell, what are crystal/caramel malts?

They’re a grain (typically barley, but might also be wheat, rye, or some other grain) that have been malted and put through a process to covert their starches into sugars, like mashing in the husk. The grain is then roasted/kilned to the desired colour. The resulting malt is ready to use and doesn’t need to be mashed (though it can be) since the starches are already converted. This makes a great grain for steeping when making beer with just extracts. It adds some fermentable sugars to the wort, but it adds a lot of longer chain sugars that help build body and good head retention. They also add some sweetness and flavour, and add colour to the beer. As you can see, this is a pretty useful malt and its no wonder why its in so many recipes.

So, whats the difference?

It comes down to history first and process second. Crystal malt first developed in Britain in the lat 19th century, most likely in response to the decrease in the gravity of British, and therefore malt and flavour, of beer that was being produced. These malts allowed for the lower grain bills to still produce a favourable beer.

When home brewing was first made legal (again) in the US, there was a flood of these European “crystal” malts into the US, but the domestic maltsters were already producing a similar product but calling it “caramel” malt. Much of the time it was exactly the same process, making it the same malt, but in some cases it was made differently.

For simplicity sake (and to make a distinction), I will call them “crystal” and “caramel” malts, though many times malts these names are used interchangeably by maltsters, causing more confusion. I will use the names to indicate the difference between the process, but you will have to get confirmation form your supplier (if you can) as to what process was used to produce the malt you’re buying. If you can’t get the information about the malt, if you crack a bit of it open and 90+% of the kernels are a glassy, crystallized sugars inside, then its crystal type. If its uneven and a mix of different centres to the malt, its caramel type.

The biggest differences between crystal type malts and caramel type malts comes down to the equipment used and the heat of the process. In both cases, the barley (or another grain) is malted and then this “green” malt is steam-cooked in the ‘sacch rest temperature range (60-70 C, 140-158 F) to convert the starches to sugar.

The crystal malt name refers to the “crystallization” of the sugars. In this process the malt is “cooked” in a roaster that can, if needed, achieve temperatures in excess of 700 F. The conversion process is quicker in the roaster because it can easily get to temperature while the grains remain moist. Conversion can be complete in under an hour and then the malt is roasted. The grain is heated to the point of “crystallization” of the sugars, called “hard crack”, this is above 300 degrees F (anyone who has made candy will know what this is about). This is a caramelization of the sugars and makes a toffee/caramel taste that varies with the degree to which the malt is roasted.

Caramel malts are produced in a kiln and it is not nearly as hot as a roaster. The temperature of a kiln can’t make 300 F to produce the “hard crack” caramelization like a roaster can. This process is similar in that the malt goes in wet, but because of the limitations on the temperature, and the size and shape of the kiln, the malt starts to dry on top before the conversion is complete causing the process to be a lot longer. Also, since it can’t get as hot, to achieve the colour it takes longer, and the way the kiln works means the grains can be unevenly roasted. This longer, cooler process will produce some caramelization, but not to the degree of the roaster. The flavours produced are from Maillard reaction (a chemical reaction with sugars and amino acid: heat + amino acid + sugar = hundreds of flavour compounds and a discussion for another post) that may be similar to caramel flavours that varies with the degree the malt is kilned.

So, its two sides to the same coin?

Yes and no. Yes, as in it produces malts that are similar in usage and flavours. No, as in the malt produced is chemically different and will have a slightly different flavour (Maillard verse caramelization). Due to the way the colour is formed from one type to the other, a crystal malt with a Lovibond colour of 40 degrees (Crystal 40) and a caramel malt of 40 degrees (Caramel 40) probably won’t taste quite the same, but could be used interchangeably to produce a similar colour and body in a beer. Crystal malt tends to be a cleaner, more pure sweetness, while the caramel malt, though sweet, has a more bready, biscuity flavour.

Most of the time it will be crystal types malts that are found on the market. The majority of the European maltsters will be producing the crystal type and a good portion of the North American masters will be the same. It’s not to say one will be better for your beer than the other, but it is to know the differences, know what you want to achieve, and understand how to get there. And always, let your tastebuds lead the way and keep good notes.

For more reading on this see Terry Foster’s and Bob Hansen’s article in the November 2013 issue of Brew Your Own magazine or this article from Briess.

For many brewers the steps together from grain to glass are a no brained – mash in, conversion rest, mash out, lauter, and sparge. For those who seek to get the highest efficiency possible and ring every last bit of sugar out of the grain, the sparge is pretty important.

But what about those who just want to make good beer and don’t really concern themselves with high efficiency, but rather consistent results (yours truly included)? Do we need the sparge?

There was a very inspiring article in the November 2011 edition of Brew Your Own about no-sparge brewing. My own personal experiences have fallen pretty much inline with what the article said, and it make sense; the efficiency falls off pretty quick the higher the gravity (above 1.045-1.050), but the beer has a nice round maltiness. Theres seems to be little or no difference on low gravity beers as far as efficiency goes, but it rounds out the flavour and keeps it from seeming too thin.

The technique is petty simple – add all the water you will use for brewing (mash and sparge) to the grains and when it’s converted, run it out into the kettle and boil. Couldn’t be easier. This is a pretty thin mash, but it’s forgiving. The one thing to keep in mind is that the mash tun needs to be able to handle the whole volume – this isn’t too much of a problem for low strength brews. You might need a bit more grain to make up for the loss on efficiency, but its a minimal cost.

For some comparison, in the days of ol’, most brewers were pretty much doing this already, they’d run out the first lot of wort and make a strong beer, the difference is they’d add more water and do a second (or third) running to make progressively weaker beers. This is known as parti-gyle, with the first gyle resembling a no-sparge type batch. Also, there is a rise in “Brew-in-a-bag” style brewing, where the brew kettle acts as the mash tun and a large mesh bag contains the grains. The whole volume of water is typically used and to lauter, the bag is just lifted out and let to drain. Sounds like no-sparge to me.

The greatest thing about home brewing is the ability to experiment. I once heard Michael Dawson say (and I’m quoting from memory), “Whats the worst that will happen? You’ll get some beer”. So, experiment, have fun, enjoy some beer, and share your experiances.

From the brewer:
“Propeller Double IPA is a full bodied, American style Double India Pale Ale that is brewed with premium Pacific Northwest hops and a rich blend of 2-row Pale and Crystal malts. Following fermentation it has been heavily dry hopped (a process that enhances the aroma without imparting bitterness in beer) giving this bold brew its big west coast nose. Double IPA delivers a huge amount of piney, floral, and citrusy hop aroma and flavour from start to finish that is balanced by sweet malt flavours. At 8.2% alcohol by volume and 85 IBUs, Propeller Double IPA is not for everyone… It is a TRUE hop bomb, for TRUE hopheads.”

Appearance
Brilliantly clear. Dark copper, amber. Little head, settling to slight film that lasts. No lacing to speak of, but with 8.2% ABV that’s to be expected.

Flavour
Up front carmel sweetness with a firm enough bittering to balance. Citrus, grapefruit. Bittering doesn’t last on the tongue but is there long enough to cut the sweetness.

Overall
A good beer with a good balance. Fairly easy drinking, especially for 8.2%. Not a hop bomb, but a good introductory beer for hop-head-wannabes.