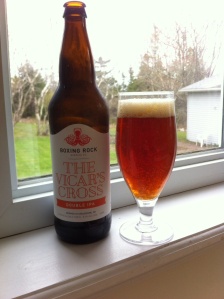 Boxing Rock is a craft brewery located in Shelburne, Nova Scotia founded in 2012. Using their 17HL brewhouse they produce a growing list of beers.

The Vicar’s Cross, a Double IPA, is one of the flagship beers for Boxing Rock.

From the brewery: “British soldiers stationed in India receiving their daily beer ration would never have expected this. The Vicar’s Cross has all the bitterness a double IPA demands, yet it is remarkably smooth and well balanced.”

Appearance: Amber, bight and clear, with a nice off-white cream head that is long-lasting. Great lacing on the glass that is still there when the beer is all gone.

Aroma: The first thing, and most dominate thing, in the aroma is sweet hops. The hops are fruity, piney, and a bit grassy, with some nice freshness to them. There is a bit of the malt that lends some sweetness in the aroma.

Taste: As this hits the palette it’s the hops that are there first – piny and resin, bitter – but there is a bit of sweetness from the solid malt backbone to balance. There is a good amount of bitterness in this ale, but the brewer has done an excellent job of crafting the malt bill to support the bitter with just enough sweet.

Mouthfeel: The body is medium with a creamy texture that is quite pleasant.

Overall: This is an excellent beer. Well made, well balanced, and quite enjoyable. Surprisingly easy to drink considering the large amount of hops and high alcohol. The brewers at Boxing Rock have done a great job of making this beer big and bold, but balanced and refreshing.