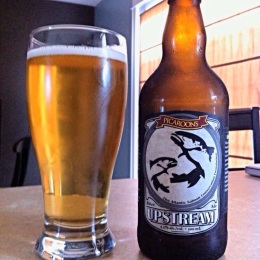 Released in support of the Atlantic Salmon Conservation Federation, Picaroons Traditional Ales of Fredericton, New Brunswick has again released their Upstream Ale. This limited release is unique in flavour and help to support conservation efforts for wild salmon in Quebec and Atlantic Canada.

What did I think?

Appearance: This beer is crystal clear, and golden in colour. With only a very slight head.

Aroma: The aroma is malty, with hints some dark malts (despite its light colour). There are some notes of wood or smoke.

Taste: The flavour is toasty and unique, with a slight smoke-like/phenol flavour. There is a bit of sweet malty flavour with some grain/bread. Even though its a light beer it still has a somewhat richness in the flavour. Unique.

Mouthfeel: The body and carbonation levels are both light to medium.

Overall: Not like anything I’ve had. Easy drinking and light, but bold at the same time. Its worth trying and you can fell good about supporting a great cause, but get it quick, this is a really limited release.