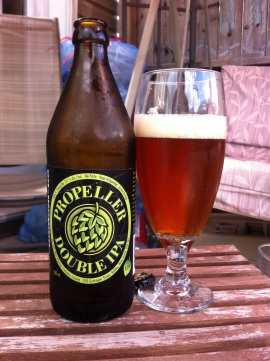 Propeller is a staple of the Halifax, NS craft beer scene. Now operating at both their original brewery at 2015 Gottingen Street in Halifax and in their new brewery at 617 Windmill road in Dartmouth, they continue to produce award-winner ales and lagers.

“At Propeller we craft classically styled world-class beers using all natural ingredients. We believe that there are only two major components that go into brewing great craft beer; ingredients of the highest quality and a brewmaster’s skill. The result is a taste experience that’s both unique and special.

“Propeller Double IPA is a full bodied, American style Double India Pale Ale that is brewed with premium Pacific Northwest hops and a rich blend of 2-row Pale and Crystal malts. Following fermentation it has been heavily dry hopped (a process that enhances the aroma without imparting bitterness in beer) giving this bold brew its big west coast nose. Double IPA delivers a huge amount of piney, floral, and citrusy hop aroma and flavour from start to finish that is balanced by sweet malt flavours. At 8.2% alcohol by volume and 85 IBUs, Propeller Double IPA is not for everyone… It is a TRUE hop bomb, for TRUE hopheads.”

Appearance: The appearance is copper with orange highlights. It has an off-white head that is long lasting and has good lacing.

Aroma: The aroma is of malt with a caramel/toffee sweetness. The hops are really only slight presenting as a light citrus, a bit flowery, and dank.

Taste: The flavour is smooth. The balance is to the hops, but they are not as much as dominate as some IPAs but firm enough to counter the slight sweetness from the malt. Very easy drinking.

Mouthfeel: The body is medium body with a medium-light carbonation. There is a slight slickness to the mouthfeel, probably from the hops.

Overall: This is one of my go-to’s for an IPA. Its an easy drink with lots of flavour, but a balance that lets you have a couple – though after a couple you might not be walking so straight.