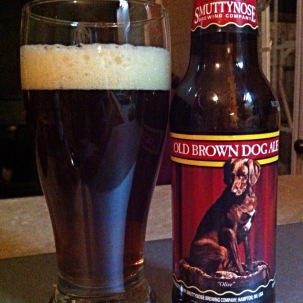 We all know that distance can be a problem getting the beers we want to try, so when my wife was heading to New England on a trip I was pretty excited. I got out my pen and paper and made a list. Topping that list was pretty much anything from Smuttynose. After having the pleasure of trying their Finestkind IPA I knew I wanted more from them. When my wife returned with Old Brown Dog I knew this would be good.

From the brewery: Old Brown Dog has been cited as a classic example of the “American Brown Ale” style of beer. Compared to a typical English Brown Ale, Old Brown Dog is fuller-bodied and more strongly hopped.

Old Brown Dog has been around for many years. It was first brewed in 1988 at the Northampton Brewery. In 1989 it won a silver medal in its category (American Brown Ale) at the Great American Beer Festival in Denver. It has since been retired from competition but enjoys love and respect from people all over the world.

Overall: Very nice to drink. Not like the IPAs that I’ve had from Smuttynose, but shows their range of producing fantastic beers. Balanced and with a good hit of alcohol (6.7%) that is unlike the UK cousin beers, though you’d never notice in this one. Well done.