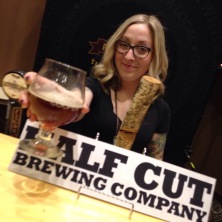 This past weekend was the Fredericton Craft Beer Festival. This year the organizers expanded the event, not only with an additional tasting session, but with a full week of activities all across the city of Fredericton, as always, the festival was the crown jewel event. Well organized, in a perfect location, and with loads of great beers.

This year’s event saw many new breweries, several that only opened in the past year, and many regional favourites returning, along with some national and international brands.

Barnone Brewery (Rose Valley, P.E.I.) Lil DIPA: A well made example of what a big IPA should be: big and bold, but still balanced, and very drinkable.

Moosehead Brewing (Saint John, N.B.) Chocolate Orange Ale: I never thought I’d have a Moosehead beer on a “best of” list, but this one really surprised me. Thanks to a friend at the fest we got to try this very limited cask release. Nice chocolate flavour with some orange and residual sweetness—like a malty, liquid version of an orange chocolate. Well done. Keep surprising us with these.

Sunset Heights Meadery/Pollen Angels (McLeod Hill, N.B.) Naughtea: I’ll admit, I’m not big mead drinker, but this one was not what I think of when I think mead. Infused with green tea, it refreshes the palate and begs for the next sip. Earthy and herbal, but rounded with some honey sweetness.

Bore City Brewing (Moncton, N.B.) Marécage: I’m a sucker for a good farmhouse styled beer, and this is a good one. This Belgian-inspired beer is dry with a fruity aroma and the spicy saison flavour you expect. Hints of malty and some bitterness finish it off. This is great now, but would be better in the heat of summer, and I’m now ready for it.

For me, this was a tough decision. There were so many great beers, from many excellent breweries that it was hard for me to settle on just one. I admit that I went back and forth. In the end I had to pick Big Spruce Brewing (Nyanza, N.S.). I had several of their beers and they all were top-shelf beers. I’ve always loved the beers from Big Spruce and their showing at the fest exceeded my expectations. 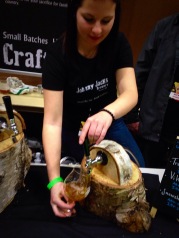 Johnny Jacks Brewery (Oromocto, N.B.) Trench Fighter: Smooth, bitter, and creamy, this American style was the best IPA I tried all night, and a textbook example.

Maybee Brew Co. (Fredericton, N.B.) Long Carry Brett Red: This one excited me as soon as I heard about it; I figured the brett yeast would guarantee some funky flavours, and I was right. Dry with an interesting dankness. Tastes a lot better than it smells.

Barnone Brewery and Hop Farm (Rose Valley, P.E.I.) La Vaca Loca: I often find milk stouts too sticky-sweet, but I’ve never had a bad beer from Barnone, so I decided to give this one a try. And am I glad I did! Surprisingly dry, light, and refreshing for a milk stout.

York County Cider (Fredericton, N.B.) Sweet William: The best ciders are as straightforward as a punch in the mouth, and that’s a perfect description of this one. Elegantly simple, it tastes like nothing more than a bite into a fresh, crisp apple. Almost perfect.

Moosehead (Saint John, N.B.) Wee Heavy: I know, I’m as surprised as you are to see Moosehead on this list. Brewed just for the festival, this one was on cask and about as far removed from Moosehead’s typical macro lagers as you can get. Rich and flavourful, with hints of caramel; lingering boozy warmth.

It would be more dramatic if this were a tough decision, but Johnny Jacks Brewery (Oromocto, N.B.) locked up my vote pretty early in the evening. I liked every beer I had from them. In addition to the best IPA of the festival, they poured a surprisingly flavourful gruit (an ancient and largely unappreciated hopless style) and a light and endlessly quaffable blonde. Nice friendly folks skillfully crafting distinctive and flavourful small-batch beer.

Matt Small is the founder and head drink-n-brewer at Drink N Brew. Matt’s love of beer runs to all styles and as an avid home brewer he has brewed many of them.

Regular contributor and guest reviewer Trevor J. Adams is senior editor with Metro Guide Publishing and the editor of Halifax Magazine. In 2012, he published his first solo book, Long Shots: The Curious Story of the Four Maritime Teams That Played for the Stanley Cup (Nimbus Publishing). You can see what Trevor is drinking on Untappd and follow him on Twitter.