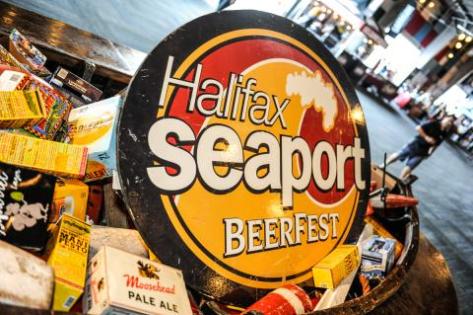 Last weekend saw the return of the Halifax Seaport BeerFest, so we laced up our drinking shoes and headed to Cunard Centre on Friday night. It was my (Trevor’s) first time at the BeerFest since it moved indoors, and Matt’s first time ever. After a decade of doing this, organizers have built a pretty well organized, efficient festival, and as always, the beer is the star. Some 110 producers from around the world offered up 326 different beers and ciders, which has to be the widest selection ever offered in Atlantic Canada. On Twitter, I saw a couple people grumbling that many Nova Scotian brewers weren’t there. 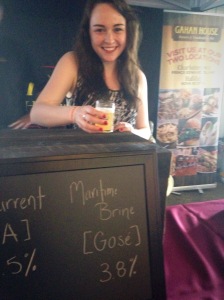 This year’s Seaport BeerFest included a great variety of beers from the U.S., Ireland, Ontario, Quebec, and Western Canada. Below are our favourites (in no particular order). Were you at the festival? Which beers make your list? Post a comment below to weigh in. 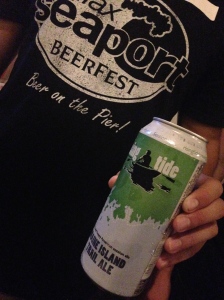 Le Coq by Le Trou du Diable in Shawinigan, Quebec
This, for me was a near perfect beer. Tart cherries with a beautiful malt balance. There are a lot of breweries doing sour beers these days, but few are as perfect as this one.

Buneos Dias by Beau’s All Natural Brewing Company in Vankleek Hill, Ontario
This is a style of beer that has really grown on me. Gruit is a beer brewed in ancient tradition with herbs and spices for flavouring rather than hops. This beer is tangy and peppery with a great dry finish. Each sip begs for the next.

Maine Island Trail Ale by Rising Tide Brewing Co. in Portland, Maine
This is a great example of how a session IPA should be done. There is a great happiness, but still balanced with a malt backbone. The carbonation is kept at the right level so that the beer isn’t thin. Other breweries could look to this beer to see how to do a session beer right.

Wheat by Side Launch Brewing in Collingwood, Ontario
This is a well made traditional hefeweizen. They hit the balance of wheat malt flavours and banana and clove just right. Nothing is over powering, making this a great hot day patio beer.

Saison Framboise by Brasserie Dunham in Dunham, Quebec
If I just said fresh raspberries that would be enough, but this beer deserves more. The base beer is so well made, with a slight spicy notes and a dry finish, but the bright, fresh raspberries are the true showcase for this beer. Bravo. 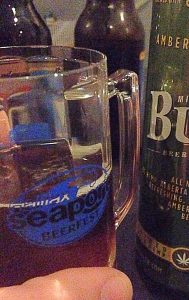 Dark Arts Porter by Trouble Brewing in County Kildare, Ireland
It seems near impossible to find a nice dry textbook porter that’s not a booze bomb and/or hasn’t been infused with vanilla (or cinnamon or whatever). Trust an Irish brewery to fill the craving. Balanced, dry, and rich. Velvet in a glass.

Pucker Up Pomegranate Hibiscus Wit by Garrison Brewing Company in Halifax, Nova Scotia
I didn’t expect a wit to offer a mouth-puckeringly sour sucker punch of flavour, but that’s exactly what I got here, and I loved it. One of my favourite beers ever from one of my favourite breweries ever.

Smoke & Mirrors Imperial Smoked Ale by Coal Harbour Brewing Company in Vancouver, British Columbia
Here’s the thing about smoked ales: they tend to taste like smoke, and nothing else. This is easily the tastiest smoked ale I’ve ever had. Subtle peat, chocolate, and malt flavours nicely counterbalance smoky acridity. My favourite beer of the night.

Wag The Wolf Hopfenweisse by Beau’s All Natural Brewing Company in Vankleek Hill, Ontario
This starts out like a classic Bavarian weissbier, but then those New Zealand hops kick in. The result? Wheaty sweetness morphs into a citrus zing, with a surprisingly bitter and clean finish.

MATT’S FAVOURITE BREWERY OF THE NIGHT: Beau’s All Natural Brewing Company in Vankleek Hill, Ontario
I have tried Beau’s before and thought they were pretty good, but having tried a wider selection of their offerings I’m thoroughly impressed with them. Every sample was a great beer and they came from a wide selection of styles. Not only was the Buenos Dias great, but they had a great kölsch (Lug Tread Lagered Ale), a great milk stout (The Tom Green Beer), and a great hefeweizen (Wag The Wolf Hopfenwisse) – all excellent beers that could have made my list. I will be keeping my eye out for more from Beau’s.

TREVOR’S FAVOURITE BREWERY OF THE NIGHT: Coal Harbour Brewing Company in Vancouver, British Columbia
It’s tempting to pick these guys solely on the basis of the masterfully crafted Smoke & Mirrors Imperial Smoked Ale, but the Blackwing Baltic Porter is damn good too (sweet, crisp, and dangerously quaffable at 7.5% ABV). If the list above were a Top 6, it would include Blackwing. I can’t wait to try more from Coal Harbour.

Matt’s love of beer runs to all styles and as an avid home brewer he has brewed many of them.

Regular contributor and guest reviewer Trevor J. Adams is senior editor with Metro Guide Publishing and the editor of Halifax Magazine. In 2012, he published his first solo book, Long Shots: The Curious Story of the Four Maritime Teams That Played for the Stanley Cup (Nimbus Publishing). You can see what Trevor is drinking on Untappd and follow him on Twitter.