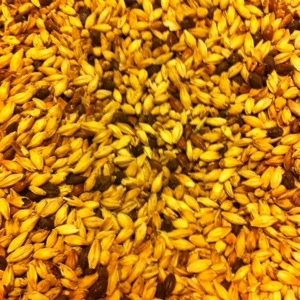 Raw grain, usually barley, is moistened to allow the germination process to begin. Once the desired germination has been reached (enough of the starches have started to modify and become available to be used, but before a plant starts to grow—called Modification) the process is cut off by roasting the grain. The grain is now called Malt and can be used for brewing. This base malt is light in colour and flavour, but may be roasted darker or otherwise “cooked” for more intense colour and flavour. This makes the malt a speciality malt and used as a flavouring and colouring malt to add character, body, and head retention to the beer.​​

Once the malt is produced and the recipe developed, the next step is making the Wort – this is the unfermented beer. First, the malt is crushed. The goal of the crush is to pulverize the inside of the grain, but leave the husk on the outside pretty much intact – the husk becomes filter material later in the process. This crushed grain is now called the Grist. The grist is mixed with hot water to make Mash. The temperature in this step is very important. This causes enzymes in the grist to convert the starches to sugars. It takes a minimum temperature to activate the enzymes and theres a maximum temperature before they denature or turn off and can’t be turned back on. Within this range the enzymes can be made to make longer and shorter chain sugars depending on temperature—short chains ferment easily; long chains, not so much—but add body and sweetness to the finished beer.

When the enzymes are finished their work, the liquid is separated from the grain bed in a process called Lautering –where the grain husk do their filtering. The grain bed is rinsed or Sparged to ensure all the sugars are removed. The liquid is moved to the kettle to be boiled. At this point it is called Sweet Wort because the liquid is full of sugar and hasn’t had any hops added.

Next is the Boil. The sweet wort is boiled typically between 60 and 90 minutes, or longer, depending on the style and recipe. The purpose of the boil is to concentrate the sugars and sterilize the wort, but also to isomerize the alpha acids in the Hops (make the stuff in the hops to become soluble in water). Hops are the female flower of the hop plant, Humulus lupulus, a climbing plant that produces flowers in the form of cones. Hops added near the beginning of the boil impart more bitterness and less flavour or aroma. The less time that hops are boiled the greater the aroma and flavour as the compounds responsible for flavour and aroma are driven off by the boil. Aroma compounds are particularly susceptible to being driven off and therefore, aroma additions of hops are generally done with less than 5 minuets left in the boil, even after the boil (or after the fermentation—Dry Hopping). Flavouring additions are done with 20 minuets or less remaining in the boil.

After the boil is complete, the wort (its no longer considered “sweet” as the hops have been added, though it may still be sweet to the taste) is cooled and moved to the fermenter. The remaining hop solids, proteins, and other particles and left behind and discarded. The wort is now aerated – that is, air is mixed into the wort – the oxygen is used by the Yeast to grow in numbers before it ferments the wort. Yeast is added and then magic happens—alcohol is made! After about a week (for ale, longer for lagers), the yeast is mostly finished and once the Beer (yes, it’s not technically beer!) drops clear its ready for packaging.

More on Ingredients
More on Process