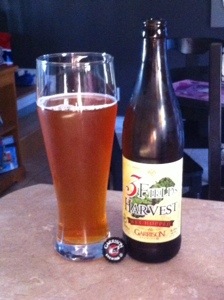 From brewer:
“Almost 200kg of wet (green) hops were harvested and hand-picked at four separate Nova Scotian farms then added directly to the boil. Wet hops impart a more subtle hop fragrance and bitterness, making them a pleasure to brew with. Lemon, orange, grapefruit, pine and ginger notes are all present to some degree in this truly special harvest brew.

100% of the hops were grown in Nova Scotia at the following fields: Meander River Farm and Wentworth Creek (Ashdale), Fiddlehead Hop Farm (Glenholme) & Ross Farm Museum (New Ross). The complex flavours showcased in 3 Fields can be attributed to the wide variety of hops in the beer including Nugget, Newport, Galena, Cascade, Zeus, Centennial and Brewers Gold.”

Appearance:
Light copper/orange in colour. Small amount of head that settles to a thin film. Hazy but clears a bit as it warms. There appears to be some hop matter in suspension.

Aroma:
Some malt sweetness with overtones of citrus. Hits of flowers and some alcohol as it’s swirled.

Flavour:
Carmel and toasted malt. Hops aren’t as forward as expected. Citrus and pine with a bit of resin. Some floral and bready notes.

Overall:
Well balanced. I’ll admit, I’m not the biggest hop-head, but this wasn’t as hoppy as might be expected, but very drinkable (true hop-heads might be a bit disappointed). At 6.3%, there could be several of the 500mL bottles in ones future. Well done.

Welcome to Drink N Brew – For the love of Beer!

Looking for a one-stop site for everything beer? Are you a beer aficionado and looking for a site to expand your beer world? A home brewer looking for some quality information or recipes? Or just someone who loves beer?

DrinknBrew.com is your site. A site for all things beer.