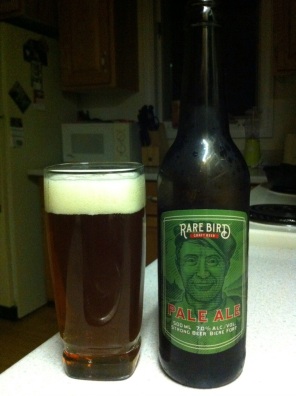 From the brewery:
“Rare Bird Pale Ale is an immensely drinkable East Coast interpretation of this classic beer style. Using pure artesian water from Nova Scotia’s pristine Eastern Shore, Rare Bird Pale Ale starts with a nice hit of hops on the nose, a delicious balance of specially selected malted barley and both English and North American hops in the middle and a dry finish that delivers a refreshing beer of rare character.”

Aroma: A bit of hops, but not as predominate as many North American styled pale ales. Some light fruit notes, probably from the yeast used.

Taste: Bitter on the back of the tongue, but sweeter up front. Some citrus and earthiness, with notes of caramel. Balanced overall.

Overall: Nice and easy drinking, even at 7% not over powering in any aspect. This East Coast pale ale is well crafted with a beautiful balance that makes it a joy to drink.